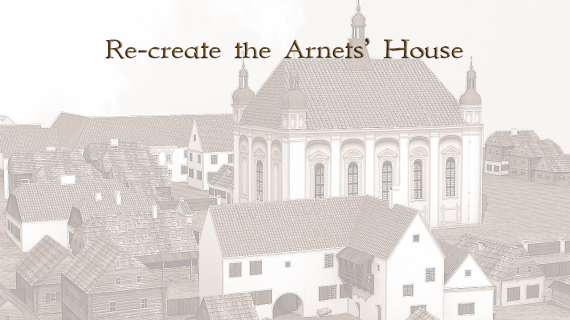 In the 17th c. Kėdainiai was a private town owned by the Dukes Radziwills of the Biržai-Dubingiai branch, a protestant island in the catholic GDL. In the town there were six national and confessional communities and 10 guilds. The Scottish merchants and tradespeople made one of the most influential communities that actively acted in the town’s econimical, religious and public life. The Scots, who started to settle in Kėdainiai from 1629, used to build large two-storied, stone residential houses with cellars for goods storage. A house of a rich resident of Kėdainiai of the Scottish nationality John Arnet was built by local masters in the central part of the town in the middle of the 17th century.

In the 17th century in the houses construction local material was used: boulders, bricks, sand, lime, plaster and wood. Local material determined a method of construction, architecture and finish.

The aim of the game

In the gameplay, a player has to re-create the Arnets’ House choosing right construction element or material.

The implicit aim of the game

Choosing right construction element or material, a player finds out how local material was used and how it influenced buildings’ architecture.

Target audience of the game

The game is adapted to pupils of 5–12 classes.

Description of the game

At the end of the game, after re-creation of the house, a player, dependingly on how he or she was successful to choose the details of the house, gets the total amount of scores (coins) and can see what products of other artisans he or she could obtain.