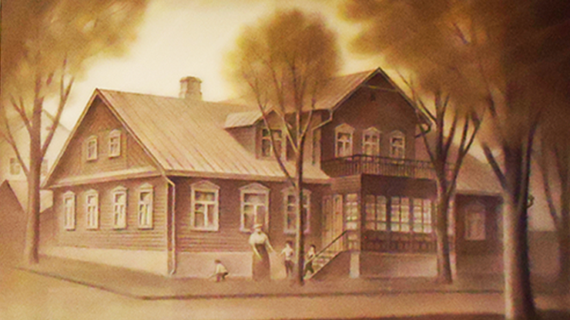 The Bahdanovich family lived in a beautiful wooden house in the outskirts of the town in the house owned by Ahulnikaw, in the district called the New World. Their family life was filled with small and significant events, interesting parties. There were held meetings with friends and neighbours, one could hear  sounds of popular music in those days, in the evenings the children were read Belarusian and Russian fairy tales and legends. In this wooden house the Bahdanovichs rented 4 rooms, each of them was a small world for little Maxim.

The aim of the game is to get to know about Maxim’s childhood, about the Hrodna period of family life and the then Hrodna in the most accessible way. In other words, to reflect the educational environment that affected the emotional and spiritual development of the outstanding Belarusian poet.

Game description. The game consists of several levels and is presented as a journey about the memorial rooms of the museum. At the initial levels players find and mark those things that match the replies to the game tasks. On the last level you need to gather the whole Bahdanovich family together, and that is the logical conclusion of the game.

In 1892 the Bahdanovich family with the sons Vadzim and Maxim moved to Hrodna from Minsk. They lived in the outskirts of the city in the district called the New World , in the house which belonged to Ahulnikaw. Here in November 1894 the third son Leo was born and in May 1896 – a daughter Nina. The conditions for bringing the  children up were good: a mild climate, a garden in the yard, a field, a forest and River Nioman nearby. The parenting mother tried a new educational system, used different smart toys, but still preferred  live communication.

Terms: Make up the names of the Bahdanovichs’ sons (Leo, Maxim, Vadzim) through the search of the letters which the things that are in the nursery begin with.

Marya Apanasawna (nee Miakota ) was born into a poor family. Her mother, Tattsiana Vosipawna soon widowed. To save her children  she sent them to  Minsk orphanage, run by L.Piatrow. Once, during the Christmas holidays , the wife of the governor of Minsk, the patroness of the shelter, noticed this lively sparkling-eyed girl and adopted her as a daughter. So, Marya  found herself in the Governor’s house, where she got a proper upbringing and education: she graduated from Minsk Women College , was admitted to St. Petersburg Teachers School. But the love of Adam Yahoravich prevented her from finishing her studies.

Terms: A mouse click is necessary to determine the things from mother’s room which correspond to the character and life style of Marya Apanasawna.

Adam Yahoravich Bahdanovich was born on March 20, 1862 in the village of Khalopenichi Babruisk district Minsk province. In 1882 he graduated from the Pedagogical Seminary in Niasvizh, and in 1888 the teacher of the 1st Minsk City College Adam Yahoravich married Marya Apanasawna. Since 1892 Adam Bahdanovich was an emploee in Hrodna branch of the Peasant Land Bank. He was a  correspondent of the renowned folklorist Pavel Shein. For some time he ran the Public library (now Regional Scientific Library named after Yawhim Karsky)

Many guests, mostly intelligentsia, gathered at the Bahdanovichs’ in Hrodna. Literary works and musical pieces were performed, discussions were held there. Marya Apanasawna was good at playing the harmonium, she  performed piano pieces by  Musarhsky, Hlinka and others. By the way, the guests were always pleased with the delicious herbs tea, which was prepared by the hostess. The living room was quite cozy: fire was burning in the oven, a samovar was boiling on the table, and happy children were running about.

Terms: Find and identify all the things that were needed to meet with friends and acquaintances in the living room .

On the turn of the XX-th century Hrodna was a provincial city, that was  located on the shortest way to St. Petersburg. According to the 1897 census, there lived no more than 50 thousand people. A significant part of the population consisted of officers’ families from the local garrison of the Russian army . In 1892 the city had 70 small workshops and businesses (the exception was the tobacco factory ran by Shereshewsky with 1500 workers), 9 educational establishments, 2 gymnasia, 2 theaters, 3 bookstores. Zaniomanskaya part of the city began to be built, there appeared photo studios which worked actively, where people of different ages, professions and social status had their photoes made.

Terms: Define three photographs reflecting the city of Hrodna during the period of the Bahdanovichs stay there.

In 1892, a few months after the birth of Maxim, the Bahdanovich family moved to Hrodna. The family consisted of four people: father – Adam, mother – Marya, their sons – Vadzim and Maxim. Father worked in the Peasants Land Bank  and  mother was a housewife and raised the children. In 1894 a younger brother of Maxim was born in Hrodna – Leo, and in 1896 there was born Nina, who soon died. Childbirth provoked Marya’s galloping tuberculosis, and in October 1896 she died too. At the end of 1896  Adam and the children moved to Nizhny Nougarad.

Terms: With a mouse click select individuals who were the members of the Bahdanovich family – mother, father, Maxim and his two brothers.

You revealed the secrets of the house and you have the opportunity to send your friends an old postcard on e-mail.

Terms: Feel yourself an artist and create the card itself: 1.Determine the background; 2.Add an image; 3.Choose poetic lines.